Sugar and I recently returned from a much-needed vacation. Okay, he needed it much more than I did, but we are ONE in the eyes of The Lord, right? We spent two weeks in St. John–a milestone anniversary trip postponed several times due to the madness which is our life. Never mind which milestone–they are all special.
This was our sixth trip, and if we ever win The Big Pot, we’ll have a home on St. John. I hold Kenny Chesney responsible for all the college spring-breakers in the airport and at Trunk Bay. Kenny did for St. John what Jimmy Buffett did for Key West, and while I’m sure the tourism industry thanks him for that, I’d just as soon he sang about the beautiful coast of somewhere else. Nevertheless, there’s a lot of his music stored on my iPhone. I don’t hold a grudge. 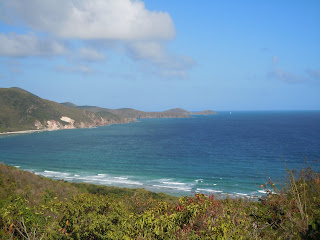 This was as laid back a vacation as you could possibly imagine. We had a very private cottage on the hillside overlooking Reef Bay and spent many days on the deck, dressed in sarongs, reading and sipping rum drinks.
Occasionally we’d slip out of the sarongs and into the pool. 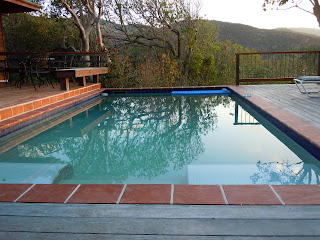 Okay, we didn’t spend the entire two weeks at the cottage…

We snorkeled… One day we ventured out and snorkeled Waterlemon Key, a small offshore island. Another time I’ll tell you about the British guy who talked like Hugh Grant and wore interesting, positively shredded swim trunks. 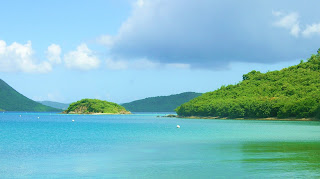 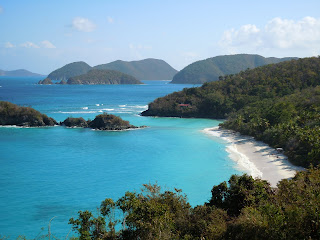 We had beach days… We spent one day at Trunk Bay, which regularly makes Top-Ten Beach lists on The Travel Channel and in travel magazines. But Trunk Bay was crowded, and we weren’t feeling the crowd thing, so our other beach days were spent at Maho Bay and Francis Bay, which in my opinion, are just as beautiful as Trunk.
We hiked… We did the Reef Bay hike, and saw the petroglyphs– pre-Columbian rock carvings chiseled by the Tainos while they smoked pre-Columbian err…herbs and communed with their dead relatives. Well, that’s one of a couple prevailing theories, anyway, and I’m not buying that alien nonsense. 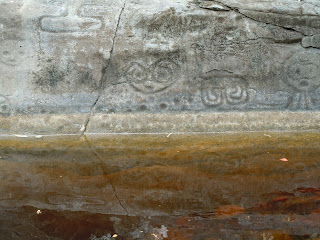 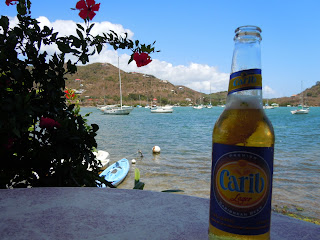 We explored… we tooled around the island in the Jeep, stopping whenever we felt like it to stare at everything beautiful. We had lunch a couple of times at a favorite bar in Coral Bay, Island Blues, which has great burgers. 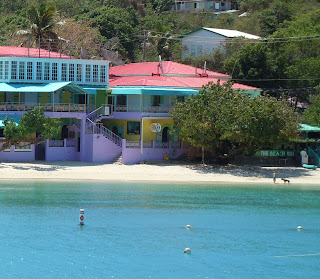 But aside from the cottage deck, where we gazed at the crystal blue waters of the Caribbean, and a billion stars, and the moon, while sipping cool drinks, our other favorite hangout was–as always–The Beach Bar.

The Beach Bar is the home of the Three Pain Killer Lunch. They serve a most excellent grilled Mahi Mahi sandwich, and I washed more than one of those suckers down with three Pain Killers. What? Of course on different days. Well, except for the one day we had lunch AND dinner there. Yes, mamma, it was Aspirin, not Tylenol. 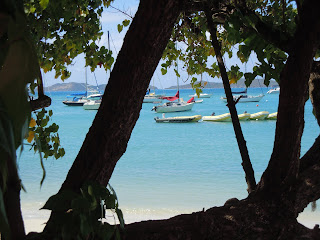 Our favorite bartender was a chick named Boo. I asked her what Boo was short for. “Tiffany,” she told me. I nodded, like I understood, and I guess I did. Everything makes sense when you’re viewing the world from The Beach Bar…