I came back from Sleuthfest in Orlando on Sunday, March 4. A lot of normal stuff happened during March, but the quantity was daunting–life, y’all know what I mean.

Then, late in March I got an offer from Henery Press to publish LOWCOUNTRY BOIL, the first in my mystery series about a private investigator named Liz Talbot. At the time I had an agent, who still had submissions outstanding. My instincts were screaming bloody murder to go with Henery Press. I have had so many conflicting feelings about which direction I should travel on the publishing road–there are many forks these days–but suddenly I was no longer conflicted. I knew what I wanted.

On Thursday, March 22, I signed the contract with Henery Press. Happy Dancing ensued. LOWCOUNTRY BOIL will be released in trade paperback and all e-Book formats on September 18, 2012. 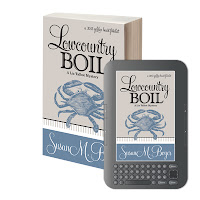 Then, on Monday, March 26, I got a call at 9:09 a.m. EDT from Romance Writers of America® (I would tell you who called, but I was so excited I haven’t a clue) to let me know that LOWCOUNTRY BOIL is a 2012 Golden Heart® Finalist. More Happy Dancing ensued, but now I was pinching myself while I danced. For weeks I kept thinking they’d call me back and tell me there had been a mistake. So far, so good on that.

And the, on Friday, April 27, I got a call from Cathy Perkins to let me know that LOWCOUNTRY BOIL is a finalist in the Daphne du Maurier Award for Excellence in Mystery/Suspense, Mainstream Category (unpublished division). I remember her name for two reasons: I know she’s the Mainstream coordinator, and she left me a voicemail as I didn’t hear my cell phone ring. Naturally, there was more dancing and pinching.

Somewhere along the way, I decided I needed a better website than the pitiful thing I had done myself. So, the talented folks at Bemis Promotions are working on a new site, which will be up sometime in June. When it goes live, this blog will be moved to a tab on the website, so that I’m integrated. I hope y’all will come visit me on the new site. I’ve started packing up to move, so blog links and so forth have been disconnected, but I will reconnect with everyone as soon as I’m moved.

I’m ecstatic with all the recent developments. Thank you so much to everyone who has supported me as I’ve chased this dream. I feel like I’ve finally reached the starting line. I know the real work starts now. I have a lot more books in me. My imaginary friends are shouting at me right now because I’m blogging and not playing with them.