I can’t believe I haven’t told y’all this story, but I’ve searched my blog high and low, and somehow, I have not.

Like many folks, I love the beach. Give me a beach umbrella, a chair, and a book, and I am one happy camper. I used to swim in the ocean, or perhaps more accurately, bob around in it, and ride the waves on anything that would float. That was before my close encounter with a stingray. 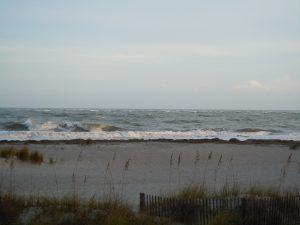 flowing into the Atlantic in the vicinity. Disclaimer: I’m not a scientist who studies such things. This is the reason I’ve been given since childhood when I ask why the water in South Carolina isn’t as clear as south Florida and the Caribbean. This could just as easily be something Mamma pulled out of thin air to keep me quite. I digress. The point is, you can’t see the bottom.

A few summers ago we rented a beach house in Garden City, South Carolina for a family vacation. It had a boat dock in the backyard and the Atlantic in the front. The first day—it was a beautiful day—Sugar, (my husband, aka Jim) my brother, and my brother-in-law took the pontoon boat out fishing. Daddy, my sister, and I were taking a late afternoon dip. Mamma was sitting in her beach chair watching us try to push each other down in the waves. We aggravate each other as a way of showing affection.

Suddenly, fish started jumping out of the water—lots of fish. They’d break the surface, hit the water and jump again. They flopped and splashed all around us. Now, I’ve always heard that when small fish do this, it’s because a bigger fish is trying to have them for supper. Naturally, I’m thinking, Shark!

“Run!” I screamed and bolted for the beach. We were almost out of the water when something got ahold of my foot and I just knew I was going to have a stump where my foot used to be. I expected gallons of blood. I’d have to be helicopter-lifted to the hospital. Would I ever walk again? Would I die on the beach from blood loss? These were the things that ran through my mind because it felt like something had chewed my foot clean off.

“A jellyfish must have gotten you,” my sister said. “I know those hurt.”

She sounded real sympathetic, but I knew there was no way on God’s green earth she could possibly know how bad my foot hurt or she would be calling 911. I wanted Sugar.

“Let’s put some vinegar on it,” my sister said.

“This was not a jellyfish,” I growled. My foot was now a brighter shade of red, and it had puffed up.

I limped towards the house. Someone called Sugar on his cell phone, and by the time I made it to the house, he was there. He put me in the car and off to the ER we went.

I am telling y’all right now, this hurt worse than childbirth. The pain radiated up my leg and the swelling spread. It hurt so bad I howled all the way to the hospital, which took only about twenty minutes but felt like days. I was scared.

I kept right on howling in the ER. They were busy, and wanted to shut me up, so someone brought out some hot towels and wrapped my leg in them. “Does that feel better?”

I stopped my caterwauling. “Yes—that helps.”

“A stingray got you. Heat breaks down the venom.”

Every time the towels cooled off, I started howling again and they’d bring more. I didn’t have to wait long. The doctor had to cut open my foot to make sure the barb wasn’t in there. Thankfully it wasn’t. After several shots and prescriptions for antibiotics and painkillers, I left on crutches.

I spent the remainder of that vacation propped on pillows in the screened porch or hobbling around. I still love beaches, but I have one iron-clad rule: If I can’t see the bottom, I don’t get in the water.