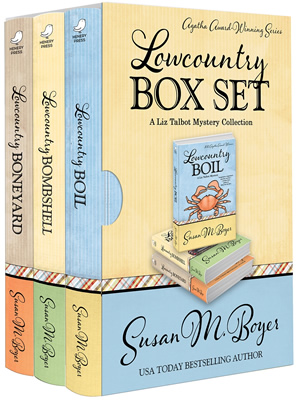 A Liz Talbot Mystery, Books 1 through 3

Well, isn’t this a lowcountry delight? The first three Liz Talbot mysteries are bundled up and ready to read. The first was an Agatha Award winner for Best First Novel and hit the USA Today bestseller list. Actually, each of these three hit that list and more.

This series has been praised by critical publications including Library Journal, Mystery Scene Magazine, Fresh Fiction, and endorsed by authors such as Carolyn Hart and Charlaine Harris.

Once you finish the third book, you’ll be pleased as punch to know Susan’s written up 6 books in this series (the 7th is about to hit her editor’s desk) (and she CANNOT wait to see what Liz gets herself into next).

This is a limited time box set. Seriously, limited time. It’ll be over lickety split and that’ll be that. So don’t wait. Buy one for yourself and spread the word. Your friends and book clubbers will thank you.

LOWCOUNTRY BOIL (#1)
Private Investigator Liz Talbot is a modern Southern belle: she blesses hearts and takes names. She carries her Sig 9 in her Kate Spade handbag, and her golden retriever, Rhett, rides shotgun in her hybrid Escape. When her grandmother is murdered, Liz high-tails it back to her South Carolina island home to find the killer.

She’s fit to be tied when her police-chief brother shuts her out of the investigation, so she opens her own. Then her long-dead best friend pops in and things really get complicated.

When more folks start turning up dead in this small seaside town, Liz must use more than just her wits and charm to keep her family safe, chase down clues from the hereafter, and catch a psychopath before he catches her.

LOWCOUNTRY BOMBSHELL (#2)
Liz Talbot thinks she’s seen another ghost when she meets Calista McQueen. She’s the spitting image of Marilyn Monroe. Born precisely fifty years after the ill-fated star, Calista’s life has eerily mirrored the late starlet’s—and she fears the looming anniversary of Marilyn’s death will also be hers.

Before Liz can open a case file, Calista’s life coach is executed. Suspicious characters swarm around Calista like mosquitoes on a sultry lowcountry evening. Liz digs in to find a motive for murder, but she’s besieged with distractions. Her ex has marriage and babies on his mind. Her too-sexy partner engages in a campaign of repeat seduction. Mamma needs help with Daddy’s devotion to bad habits. And a gang of wild hogs is running loose on Stella Maris.

With the heat index approaching triple digits, Liz races to uncover a diabolical murder plot in time to save not only Calista’s life, but also her own.

LOWCOUNTRY BONEYARD (#3)
Where is Kent Heyward? The twenty-three-year-old heiress from one of Charleston’s oldest families vanished a month ago. When her father hires private investigator Liz Talbot, Liz suspects the most difficult part of her job will be convincing the patriarch his daughter tired of his overbearing nature and left town. That’s what the Charleston Police Department believes.

But behind the garden walls South of Broad, family secrets pop up like weeds in the azaleas. The neighbors recollect violent arguments between Kent and her parents. Eccentric twin uncles and a gaggle of cousins covet the family fortune. And the lingering spirit of a Civil-War-era debutante may know something if Colleen, Liz’s dead best friend, can get her to talk.

Liz juggles her case, the partner she’s in love with, and the family she adores. But the closer she gets to what has become of Kent, the closer Liz dances to her own grave.

“Imaginative, empathetic, genuine, and fun, Lowcountry Boil is a lowcountry delight.”
—Carolyn Hart, Author of What the Cat Saw

“Mrs. Boyer has cooked up a clever mystery full of felonious real-estate developers, long festering family wounds, moonlight skinny dips and pimento cheese. It’s a simmering gumbo of a story full of spice, salt, heat and shrimp. She had me guessing, detouring for a few laughs then doubling back for another clue right until the last chapter.”
—The Huffington Post

“Twisted humor has long been a tradition in Southern literature (maybe it’s the heat and humidity), and Boyer delivers it with both barrels. In lesser hands, all the hijinks could be distracting, but not in Lowcountry Boil. Boyer’s voice is so perky that no matter what looney mayhem her characters commit, we happily dive in with them. An original and delightful read.”
—Betty Webb, Mystery Scene Magazine

“Bubbles with all the ingredients of a great Southern mystery: A feisty firecracker of a main character, a magnolia-scented atmosphere, and pages full of simmering suspense and intrigue.”
—Karin Gillespie, Bestselling Author of the Bottom Dollar Series

“Pulls the reader in like the draw of a riptide with a keeps-you-guessing mystery full of romance, family intrigue, and the smell of salt marsh on the Charleston coast. A welcome visit home with people you want to know and, in some cases, are glad you aren’t related to. A fun summer read!”
—Cathy Pickens, Author of the Southern Fried Mysteries and Charleston Mysteries