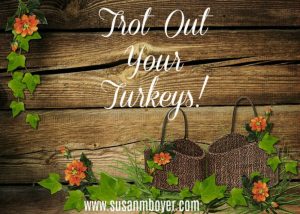 Back in the late 1800s and early 1900s, there was a columnist at the Salisbury Post whose pen name was Venus of Faith. He was the “country correspondent,” and he reported news from the small towns–Faith, Granite Quarry, and Rockwell, among others–surrounding Salisbury, which was the “big city” in the area.

Venus, (his real name was J.T. Wyatt) often ended his columns with the challenge, “If you can beat that, trot it out.” With a tip of my hat to Venus, here is my turkey story, as related by my manicurist…

Another of my manicurist’s clients is married to an engineer, or possibly a physicist–a man with some such nerdy occupation. She’s a drug rep, or maybe she sells hospital equipment–something like that. Suffice to say they are both college educated, and have demanding jobs, a house, mortgage, 2.5 kids, etc. They are living the American dream.

The day before Thanksgiving, Mrs. Very Busy Professional asked Mr. VBP to please stop by the grocery store and pick up a turkey as she was in over her head bringing home the bacon, frying it up in the pan, and making her mani-pedi appointments. He agreed to pick up the bird.

Now, Mr. VBP had been reading up on locally sustainable food sources, organic farming, global warming, and many other socially conscience topics. He was looking to reduce his carbon footprint, et cetera. He thinks to himself, I can do better than stopping by the grocery store. I can get us a REAL turkey for Thanksgiving.

He drives his Mercedes all the way to a farm in Boiling Springs and picks up a LIVE TURKEY and totes him home in a cage in the back seat. The bird was unhappy with this development, and spoke about it to Mr. VBP all the way back to Greenville.

Can you imagine this man’s poor wife’s face when he unloaded that sucker in the backyard? I crack up every time I think about it. What kind of idiot… I wonder sometimes if too much education might unhinge certain personality types… I digress.

She stared at him with confusion and disbelief. “What am I suppose to do with that?” she reasonably inquired.

“You grew up on a farm,” he said, rather defensively. “You can pluck it, right?”

Amazingly, she did not kill him.

She did what all wives do in the face of husbandly idiocy. She ignored him and carried on. She got into her BMW and drove to the grocery store, leaving him to deal with his new pet.

Thanksgiving dinner came and went, but big bird was not getting along well with the family dog in the fenced in backyard. The turkey tended to peck at the small pooch. The bird was likewise unfriendly to the children, who were afraid to go outside. Mrs. VBP had meetings the day after Thanksgiving, and demanded Mr. VBP deal with the poultry.

The farm apparently had a no-return policy, and it took some imagination and a lot of phone calls to find someone willing to adopt the turkey. Then there was the matter of cleaning the feathers and stench from the Mercedes. I guess some ideas sound better on the Internet than they are in practice.

If you can beat that turkey story, trot out your turkeys.

P.S. Don’t forget! Bob Strother’s short story collection, Scattered, Smothered, and Covered, is scheduled for release in early February and is available for advance order right now. Order your copy today and take advantage of the discount price of $9.00 — that’s six dollars off the cover price! The book can be ordered from the MSR Online Bookstore. Here is a link that will take you directly there: Scattered, Smothered, and Covered